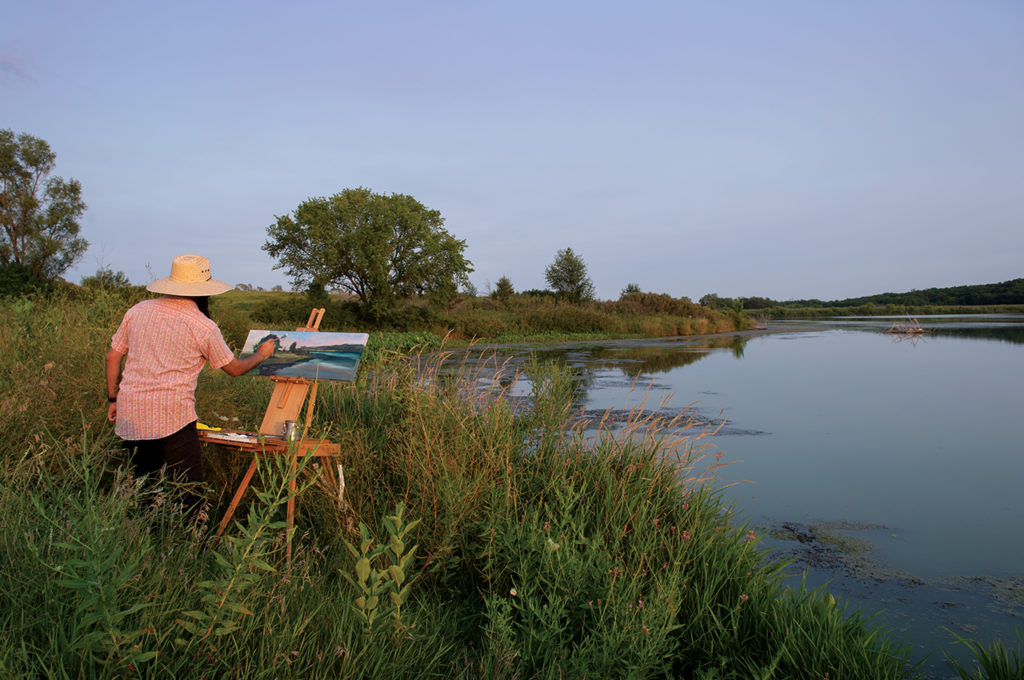 If you’re painting outside and the temperature dips below freezing, mix some vodka into your paints to keep them loose. If it’s hot out, take a batterypowered fan. If you’re in a kayak, secure your easel with a few bungee cords.

These are the sorts of tips you can learn the hard way, from personal experience, or from the growing swarm of outdoor painters who will happily share their stories from the coldest/hottest/windiest/buggiest day they ever spent trying to capture a moment on canvas.

“It’s the new golf,” says Des Moines artist Jimmy Navarro, 49, quoting a line he heard from a plein air podcast he enjoys while he’s working on a painting—or “jamming one out,” as he puts it.

Like golf, plein air painting offers a good excuse to get outdoors. It can be a rewarding challenge, a skill that is easy to learn but impossible to perfect.

It’s portable, too. Many enthusiasts take their brushes and paints on vacations or business trips, in case a scene catches their eye. The art form requires the painters to really look at a place, to appreciate it in a way that snapping a photo does not.

Navarro, an avid runner, was part of the support crew for a friend who once ran across Iowa from Muscatine to Council Bluffs. While the artist waited, he set up his easel and jammed out a painting at each checkpoint along Highway 92, which runs south of Interstate 80.

“Over every hill there were so many great spots to see, so many things I couldn’t believe,” he says. “I probably took 2,000 photos.”

He paints all over the country—the West Coast, the Four Corners, the Minnesota woods—but the northern Wisconsin native never tires of painting downtown Des Moines, where he moved in 1993. Last February, when temperatures plunged to 20-some degrees below zero, he trekked to Gray’s Lake and worked until his oil paints turned, as he puts it, “from toothpaste to chalk.”

He often meets up with other painters, including Jeff Allen of Solon near Iowa City, whom Navarro describes as a “beer snob” and “super cool hippie” who loves jam bands.

“He’s the classic ‘Lebowski’ of plein air painting,” Navarro says. “He’s, like, everything you want to be.”

Allen, 63, founded the Iowa Plein Air Painters group on Facebook in 2009, after he took a plein air painting class at the Palette and Chisel, an art school in Chicago. The group gathers most Sunday afternoons at a different location each week, mostly in eastern Iowa.

They’re following in the footsteps of earlier Iowa artists, like the naturalists Ding Darling and Althea Sherman, and, before them, the famous gang of Impressionists who left their studios to get some fresh air and fresh ideas in the 19th century. Claude Monet, Berthe Morisot, Camille Pissaro: They all immortalized their impressions of a particular place and time.

“Plein air painting taught me how to put down something quickly, how to put down the correct values and the correct color temperatures all at once,” Allen says. He learned how to fill in the most important elements first without “chasing the light,” which can change dramatically in just 10 or 15 minutes.

He also learned how to focus. Plein air painters tend to notice details other people don’t.

“Sometimes the artists will focus on something the rest of us will walk by every day and never notice,” says Linda Shearer, who organizes an annual plein air event in Corning in southwest Iowa (fun fact—it’s Johnny Carson’s birthplace).

One of the events during Corning’s painting weekend requires artists to polish off a canvas in just an hour and stay downtown, Shearer says, “so folks can stand back and watch them paint and ask questions.”

Often, the experience helps locals see their town in a new way.

“Artists have so much to offer,” says David Schmitz, administrator of the Iowa Arts Council. “Communities that invite artists to lead and participate in authentic cultural experiences—festivals, concerts, you name it—benefit in all kinds of tangible and intangible ways. Local art boosts local pride and creates a real sense of place.”

And really, a sense of place is what plein air painting is all about. That’s what keeps pulling Navarro outdoors, rain or shine. 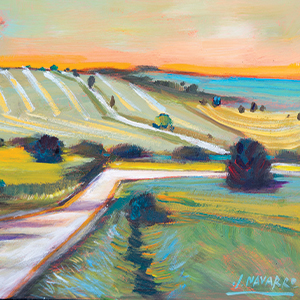 A color study of a curved road off Highway 92 (2020). Navarro spent a week on one road, when he was like “Van Gogh in a van, documenting and painting everything I [saw] interesting about Iowa, one mile at a time.” 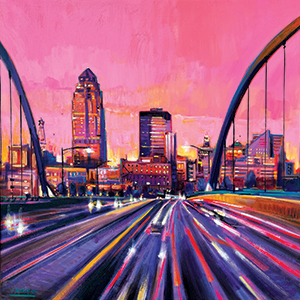 “Coming Home” (2020-2021). “This is the view I see every day on my way back to my studio apartment,” Navarro says. “Des Moines was covered in this pink red defused light from the wildfires out West.” 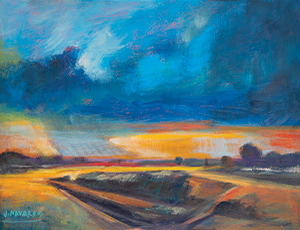 Rain shaft on the Raccoon River (2021). Navarro says he did this “quick sketch” from walking the river, “documenting how low the water levels are with a visible sandbar and a late summer storm providing rain relief.” 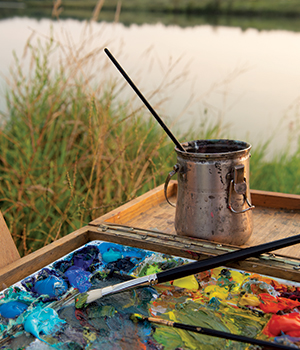 Bluff Strokes in Dubuque offers year-round workshops and an annual “Paint Out” competition in October (bluffstrokes.org).

Corning En Plein Air, hosted by the Corning Center for the Fine Arts, is part of an annual festival called Lazy Days at the end of July (facebook.com/corningcenterforthefinearts).

En Plein Air Washington is hosted in June by the Art Domestique Gallery in Washington (artdomestiquegallery.com).

Paint Van Buren County takes place in and around Keosauqua at the end of May (villagesofvanburen.com).

Plein Air at the Fair happens every August during the Iowa State Fair in Des Moines (iowastatefair.org). 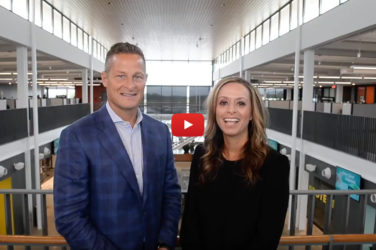 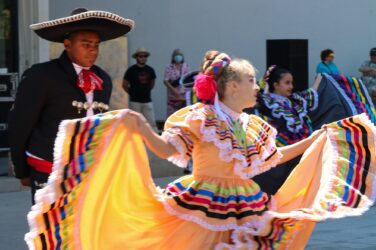 The Iowa Arts Festival in Iowa City next weekend celebrates the arts around the ... 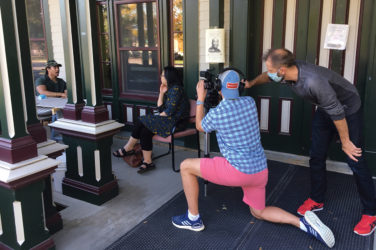 Telling the Story of the Iowa Writers’ Workshop