It began a decade ago as an effort to build a pair of simple, self-sustaining houses in southeast Iowa. That effort has blossomed into Abundance EcoVillage, an environmentally friendly community with its own water and energy systems to power 21st-century appliances and technologies.

The community’s goal, says EcoVillage home builder Amy Greenfield, is to “allow people to live more sustainably without having to sacrifice a lot of lifestyle. Anyone should be able to come here from New York or California and feel completely comfortable.” Indeed, Abundance EcoVillage is no spare, remote commune. Although its streets are gravel, paved roads and bike paths connect it with Fairfield, a town of 9,000 residents, just two miles south.

The unincorporated village’s homeowners include artists, financial planners and college instructors—mostly in their 50s and 60s. Two households include children. People here enjoy wide-screen televisions, state-of-the-art kitchens and wireless Internet connections. EcoVillagers live much the same as do urban professionals, but their environmental footprint is notably smaller.

Abundance EcoVillage is the latest in a long line of efforts by Iowans to create a utopia. But unlike the well-known Amana colonies of the late 19th and early 20th centuries, or the Amish enclaves still functioning today, the glue that binds EcoVillagers is not religion or the idea of a communal society. It’s a shared belief in the value of sustainable living.

The village’s proximity to Fairfield’s Maharishi University of Management (MUM) is no coincidence. The school, launched in 1974 by the Indian guru Maharishi Mahesh Yogi, has been attracting practitioners of Transcendental Meditation (TM) ever since. Most, but not all, EcoVillagers practice TM, in houses built on the principles of vastu, an ancient Hindu doctrine that’s been described as the world’s oldest holistic design system. Vastu takes into account five key elements—earth, water, air, fire and space–to determine proportion and placement.

Vastu principles were originally applied to houses of worship. But since the mid-1990s, they’ve also been used in commercial and residential construction around Fairfield. EcoVillage houses express vastu principles in “rooms that are organized to maximize the energy of the sun at any particular time of day,” Greenfield says. Entrances face east, bedrooms are on the west, and kitchens are in the southeast corner. Most windows face south, where 18-inch overhangs shade rooms in the summer as the sun passes directly overhead. During winter months, when the sun crosses lower in the southern sky, these same windows allow in radiant heat.

EcoVillage houses range from 800 to 3,000 square feet and are built on 70-by-70-foot lots. To date, 14 houses have been built, and six more lots are available for construction. All 20 lots occupy less than three of the village’s 16 acres. Most of the acreage is used for power and water systems, gardens, roads and storage.

A 1,600-square-foot house recently sold to a California buyer for $332,000. That price represents roughly a 15 to 20 percent premium over a comparable house built using traditional construction principles; most of the overage went toward energy-efficient features. For example, exterior walls are 10 inches thick, with twice the normal insulation.

These higher building costs are offset, Greenfield says, by lower utility expenses, which can dip to 20 percent of
what the usual urban homeowner pays. EcoVillagers are assessed a monthly $100 fee that covers electricity, water, sewage and snow removal, with enough left over to save for future maintenance.

A variety of environmentally aware communities have sprung up nationwide in recent years, most based on similar philosophies of living harmoniously with nature. The concept for Abundance EcoVillage originated with a trio of Fairfield residents: home builder John Freeberg, electrical engineer Lonnie Gamble, and Michael Havelka, a wildlife biologist with expertise in soil and water systems. These specialists joined forces to construct off-the-grid residences for Gamble and Havelka.

Gamble was the one who suggested expanding the team’s vision from a couple of houses to a community, where more people could practice sustainable living. He bought 16 acres north of Fairfield, and the men assembled a plan to sell lots. Their concept was to use money from the lot sales to put in roads, plus water, sewer and energy systems. Originally, lots sold for $30,000. Today, the price is $40,000.

“We were a low-budget operation,” Havelka recalls. In fact, they were a little too low budget, because they soon discovered it was easier to sell a house than an empty lot. Starting in 2002, they built and sold a few houses, and then a few more. Today, the village has evolved enough to include its own power system, which stores energy in a battery bank. Roughly half the electrical power comes from solar cells and half from wind. “In winter, we get more wind; in summer, we get more sun,” Havelka says.

Abundance EcoVillage’s aquatic system has three retention ponds and a pair of underground cisterns that produce two grades of water. A purified grade is used to drink, bathe and wash. A non-potable grade supplies toilets and outside taps for lawns and gardens.

In 2008, the village consisted of half a dozen homes. Then, for two years, the recession pretty much froze development. By 2010, Freeberg had retired, and Greenfield had become the village home builder.

Greenfield, 30, is the daughter of Doug and Francie Greenfield, two of Fairfield’s early TM-practicing immigrants. Doug was from New York state; Francie grew up in Northern California. They arrived separately during the mid-1970s. Like many TM transplants, Doug came with the notion of being an entrepreneur—the couple owned one of Fairfield’s first health-food stores. Then, in 1981, he co-founded Danaher Oil Co., an oil brokerage, with Jim Danaher. The partners still operate their business today, and, says Amy, her father’s success offered him “a fair amount of free time to explore other projects. He got into buying and fixing up old buildings.”

An early convert to vastu principles, Doug was “one of the first people in the Western world to understand what the Maharishi was talking about,” Amy continues. She, too, studied with the Maharishi, as well as at New York’s prestigious Parsons The New School for Design. And she learned a great deal from her father, who ended up running the architectural division of Maharishi Global Construction Management L.C., a business that’s built a half-billion dollars’ worth of construction projects around the world.

Over the past eight years, Amy Greenfield has built 22 houses around Fairfield, including four EcoVillage residences. Currently, she partners with Troy Van Beek, a former
Navy SEAL, in a business called Ideal Energy Inc. (Like Amy’s parents, Van Beek moved to Fairfield to study Transcendental Meditation.)

So what’s the future of this model community, and its half-dozen remaining sites? “I’m sure if we built spec housing, we could easily fill them in a year,” Havelka says. (He’s probably right: The village has been recognized by no less an arbiter than Oprah Winfrey, who touted it on her show after her visit to Fairfield in fall 2011.) But instead, the developers will keep doing what they’ve generally done—wait for buyers to commit. And once the final six lots are inhabited, that’s it. The community won’t expand beyond its current 16 acres. “Although,” Havelka says, “we’ve talked about writing ‘EcoVillage for Dummies.’ ”

David Elbert writes “The Elbert Files,” a weekly column about business and economic trends for the Des Moines Business Record. He retired earlier this year from The Des Moines Register, where he was a business writer, columnist and editor. During his 36 years at the Register, Elbert also covered local news.

Rooms with an Eco View

Artist and Abundance EcoVillage resident Stacey Hurlin calls her community “a gem and a secret. Nobody really notices it unless they research it.” In 2005, the Hurlins moved from a 5,800-square-foot home in Fairfield to a 1,200-square-foot house in Abundance EcoVillage. The couple’s downsizing made sense; their five kids were grown and gone. But, once settled in, they realized they wanted something else close by, where their children and grandchildren could stay during holidays. Three years ago, they erected a two-story building in the village and christened it Sweetwater Luxury Bunkhouse (sweetwaterfairfield.com). The Bunkhouse has four bedrooms, two bathrooms and a fully equipped kitchen. When the Hurlins’ descendants aren’t visiting, the place functions as a mini-hotel.

The Bunkhouse hosts a steady flow of weekenders, mostly for events at Fairfield’s Maharishi University of Management. But it provides an ideal perch for anyone curious to see what the EcoVillage is all about. Rooms start at $59 per night, with a two-night minimum.

Written by Mark Kane [dropcap]H[/dropcap]ave you heard of The Wapsipinicon Almanac? As a fan ... 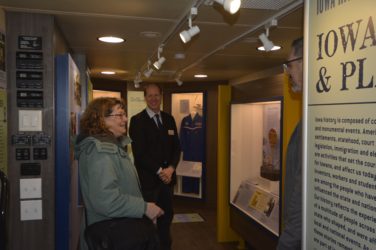 A Road Trip For The Ages