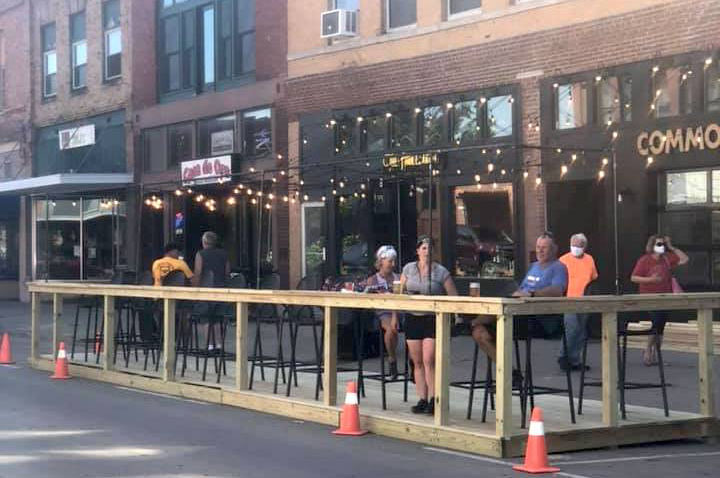 By Karla WalshPrior to the pandemic when Mike Fastenau, the community and economic development director for the city of Perry, visited cities on the coasts and in more tourist areas, he noticed a trend he wanted to try closer to home: street eats. That is, transforming some of the parking spaces in downtown areas to expand outdoor dining.“The idea has been kicking around for the last year or so, as we’ve been wanting to continue the renaissance in our downtown area. Then COVID-19 hit and shut things down,” Fastenau says. The city then started considering the concept as a way for restaurants to be able to expand outside dining so their patrons would feel safer and more comfortable.
Enter Perry’s pilot program to test out “streateries,” which now includes one street with on-street al fresco dining seven days a week from 10 a.m. to 10 p.m., with likely three more to join this fall or next spring. It’s modeled after similar programs in Muscatine and Indianola.

The city plans to work with restaurants to keep the larger outdoor dining areas up and running daily through November, then relaunch them in late April or early May of 2021. “We haven’t really had any pushback from the public about losing parking, and it’s really nice to see the city safely open back up,” Fastenau says.“We are at the trailhead of the High Trestle Bridge Trail, and we’re hoping to inspire people to explore Perry while they’re in the area,” he adds. “It really distinguishes Perry from other dining options …, although we’d love it if more Iowa cities adopted streateries too.”

A Tale of Two Hotels

The High Trestle Trail Bridge near Woodward is one of the crown jewels of ...