More than 1,100 people packed the most recent Midwest Antique and Art Show in Cedar Rapids. No doubt some folks wandered through with old, treasured friends for a little Sunday-afternoon crowd watching. But most were impassioned collectors, moving quickly to scoop up their next old treasures.

The show occurs twice a year, spring and fall, at Hawkeye Downs Fairgrounds, and it’s only a one-day event. Close to 80 dealers from 18 states fill the exhibition hall with top-tier Americana and folk-art finds. These sellers meet, or reunite, with knowledgeable customers hailing from California, New York and hundreds of points in between.

“On the mornings before we open,” says West Branch dealer Thomas Rawson, “we easily have 400 people waiting in line.” Rawson, with his wife, Kathy, and Cedar Rapids dealers Tom and Paula van Deest, founded the semiannual event in 1986. Over the past 26 years, it’s become the best-vetted and most consistently rewarding antiques show in Iowa.

For a while, Rawson notes, the show extended early-entry privileges to special customers. Then, the organizers saw the democratic appeal and excitement-building potential of letting everyone into the hall at precisely 10 a.m. The resulting furor of extended elbows and fluttering checkbooks means, according to Rawson, that “a lot gets sold in the first hour—especially the great stuff.” Recently, the great stuff has included weather vanes in the $20,000 range, a highboy for $15,000 and mechanical toys for $10,000.

Seven years ago, the Rawsons and van Deests rounded up a different group of dealers than the ones they’d previously cultivated. They gave their new group a chance to display merchandise in a space adjacent to the Midwest Antique and Art Show, and christened this expansion The Collector’s Eye. Here, shoppers prospect booths filled with less costly vintage wares, like cheery pastel pottery, costume jewelry and advertising memorabilia. “We want to sponsor dealers in Arts and Crafts things dating from the teens and twenties, as well as in mid-century modern furniture,” says Tom van Deest.

Over the past five years, van Deest has observed several trends among buyers. “People are no longer collecting only in particular areas,” he says. “Their interests are more varied. But at the same time, they’re more discriminating. They’re not as quick to pull the trigger on an expensive piece.” Still, he adds, highest-quality antiques never fail to sell. “There’ll always be a market for the exceptional,” he says.

The autumn 2012 Midwest Antique and Art Show is scheduled for Oct. 28, and the spring 2013 show will be April 7. Van Deest says that the fall shows are especially strong because “dealers have saved special things for them—things they gathered during summer travels. Also, at our fall shows we get a good number of new dealers or dealers who’ve waited a whole year to return with fresh material.”

Seed Savers is more than a gardening resource—it’s a laudable mission. The 890-acre Heritage Farm is central to this nonprofit organization’s determined efforts to save “North America’s diverse, but endangered garden heritage for future generations.” The store and farm are open every day from March through December, and on weekends during those months, you can take guided tours.

When you go, schedule ample time. A number of display gardens (like the exmple above) showcase flowers and herbs. You can meander along eight miles of hiking trails and admire the rare Ancient White Park cattle (only about 800 exist worldwide). Your souvenir purchases might range from, yes, seeds to a storybook-perfect watering can ($73.95) or even a CD called “Sin, Salvation, and Saving Seeds” ($14.95) by Fairfield-born singer-songwriter Greg Brown.

Check out the website, if for no other reason than to order a free seed catalog (or download the PDF). What gardener wouldn’t want to grow the Amish Paste Tomato (just one of more than 4,000 tomato varieties), or the Lazy Housewife Bean?

An ecovillage of 14 households rises from the fields outside Fairfield. Though largely self-sustaining, ...

When Jon and Mary Quass couldn’t decide on a house to buy in Cedar ... 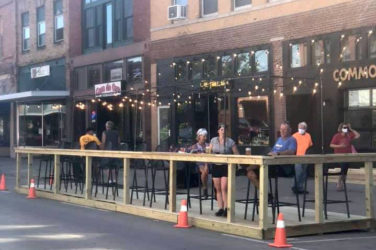 Perry Restaurants Take to the Streets